We’re doing some essential maintenance on our quote service between 5am and 6am on Thursday 16th July. During this time so you may experience some delays with getting a short term insurance quote.

We’ve all been there: stuck behind someone clearly unaware of the speed limit as their dangerous driving becomes more and more infuriating. But these aren’t the boy racers recklessly whizzing past at high speed, here we’re talking about those who drive so slowly that it can be considered dangerous.

Driving below the speed limit, not overtaking due to the risks (even when it’s clear) and being hesitant to pull out at junctions are all careful driving traits. Yet in some cases these actions can be more dangerous. We wanted to see the stats and how motorists trying to drive safely could unintentionally be doing the opposite.

At Dayinsure we take dangerous driving seriously. In order to see how many motorists may be trying to drive safely but inadvertently proving more of a danger on the roads, we conducted some primary research. Drivers filled in a survey that involved marking off whether they were guilty of 15 driving habits that could result in dangerous driving, how often they did them and whether they or anyone they knew had been involved in an accident due to dangerous driving from being too cautious.

From the survey results we found that 23% of drivers admitted to driving under the speed limit, potentially holding up traffic and causing others to react quickly to unexpected slowdowns. Younger generations seem to be the main offenders, with 31% of those aged 25 to 34 saying they drove under the speed limit, with 41% of 18 to 24-year-olds admitting to driving above it.

Men were also more likely to be speeding offenders, with 48% admitting to going above the limit compared to 37% of women. There was no clear regional divide for driving below the speed limit though, as Sheffield (46%), Southampton (35%) and Glasgow (32%) were the top three cities where it occurs. 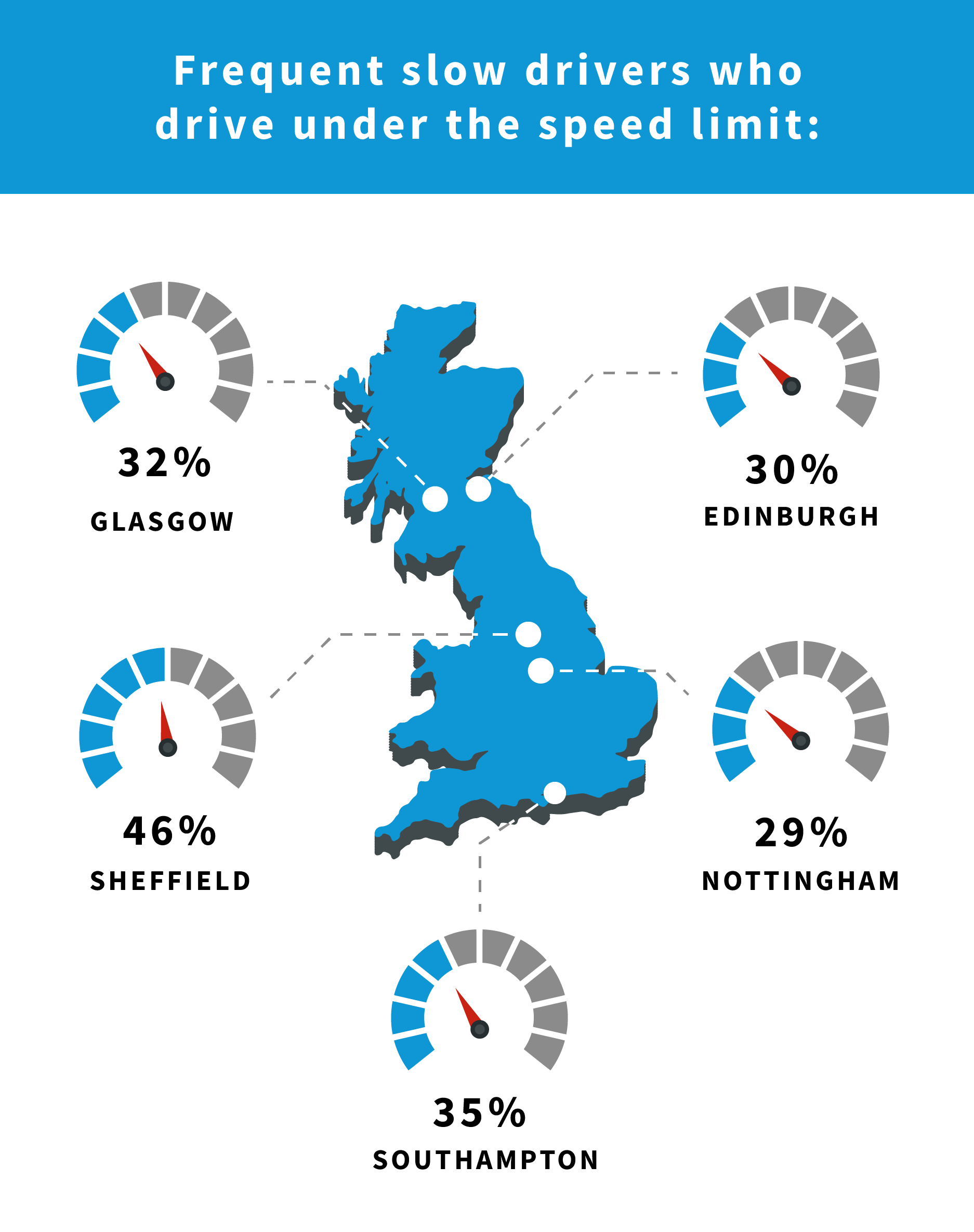 Pulling Out at Junctions

In total 16% of drivers said they were hesitant when pulling out at junctions, which can lead to a potential collision. Unlike (not) speeding, it was women (17%) rather than men (15%) who were more likely to be hesitant, along with 18 to 24-year-olds. Again, there was no regional division, with Birmingham, Norwich and Nottingham the top three culprits. No Scottish cities were in the top five though, so maybe there are fewer junctions or they just go for it when they can!

Nearly half of all drivers (45%) admitted to doing at least one of these dangerous driving habits once a week, while 5% said they do them every time they drive. Most of the time driving below the speed limit or being overly cautious in other ways shouldn’t be too dangerous, as long as other drivers are alert and adapt their speed. 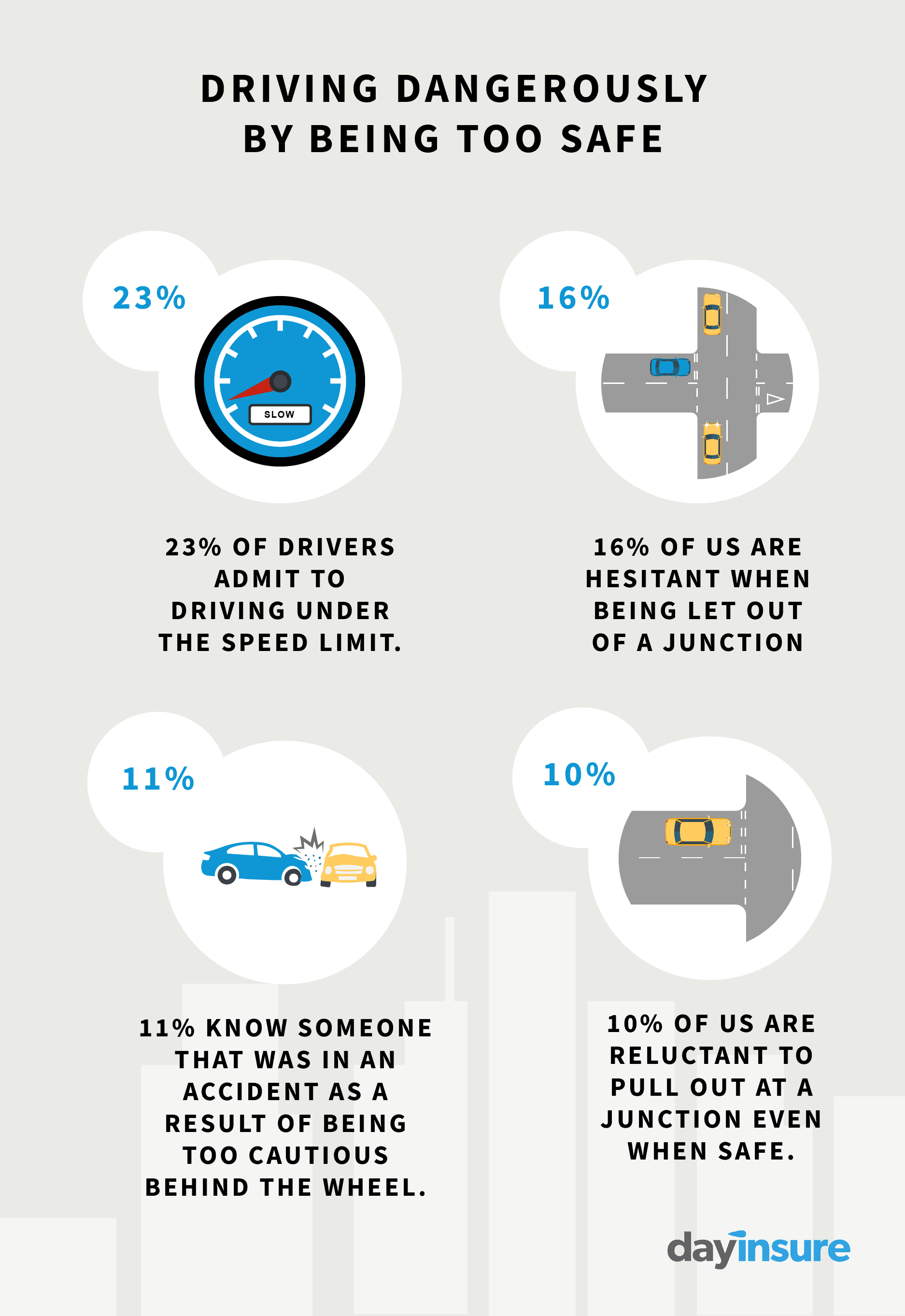 However, sometimes it can prove dangerous, with 11% of motorists we surveyed saying they knew someone who had been in an accident because they were too cautious behind the wheel. Sheffield (27%) and Edinburgh (24%) were again the places where this was most common, followed by Manchester, London and Nottingham.

These findings demonstrate that there are various cautious driving habits common with many drivers that could prove dangerous on the roads. The results suggest that Sheffield, Nottingham and Edinburgh are three of the main cities where cautious driving techniques are most prevalent, possibly due to road layouts and infrastructure or just being hotbeds for nervous drivers.

Avoid driving so slowly that it can be dangerous, or being too hesitant when pulling out at a junction, to reduce the chance of a collision. You can also protect yourself financially should you be involved in an accident with someone driving so cautiously they pose a high risk, with temporary car insurance from Dayinsure.

Tips for your first solo drive

What happens if I drive without insurance?

The best cars for new drivers